Getting Started with Mobile Commerce

If you’ve been thinking about adding mobile commerce capabilities to your retail operation, you’re right on time. And you might be surprised how easy it is to get started.

Consumers are ready for mobile commerce. The technology is here, both in consumers’ hands and at the point of sale. As of June 2014, 173 million people owned smartphones in the U.S. according to comScore.1 That’s 71.6 percent of the total US mobile market.

Asymco mapped those smartphone penetration numbers against the technology adoption lifecycle bell curve, showing that the U.S. is in the “late majority” phase of smartphone adoption. 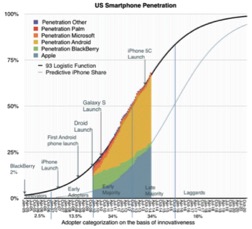 Mobile commerce is bigger than just payments. It also includes loyalty programs, offers, and exciting new ways to get to know your customers. With Softcard, you can start with a simple offer, and see value right away. If you like the results, you can add loyalty or in-store mobile payments when the time is right.

The Technology Is Here

Softcard integrates mobile offers, loyalty and payments in one free app. It helps merchants attract new customers, engage with existing customers and build loyalty through the mobile channel. It provides your customers an enhanced shopping experience. And, it’s ready now. Merchants can sign up today.

Softcard works through NFC, a short-range wireless technology that makes in-store mobile commerce possible. Hold two devices that have NFC hardware next to each other, and they can establish radio communication to securely pass information back and forth.

NFC also powers Google Wallet and Apple Pay in the US, plus other mobile wallet solutions around the world. It is quickly becoming the standard technology for mobile commerce. NFC is also powering other devices including watches, door locks, headphones, PCs, printers, household appliances and more. Hundreds of the most popular phones have the technology.

Softcard is a joint venture between three of the four biggest mobile operators in the United States: AT&T, T-Mobile and Verizon, providing access to over 200 million customers. Softcard partners with about 70% of the smartphone market, including HTC, Motorola, Samsung, etc., providing consumers with a wide range of device choices. We have also partnered with the leading point-of-sale (POS) payment terminal and software providers to ensure that Softcard is compatible with merchants’ existing POS infrastructure.

According to a 2014 Accenture study2, 40% of North American consumers already shop using their smartphones, up from 16% in 2012—a 2.5X increase in two years. Of consumers who already make mobile payments, 60% said they would do so more often if they received instant coupons as a result. Over a third, 36%, said they would hand over personal information in exchange for the rewards.

A recent Verifone survey showed that Generation Y is leading the charge for mobile payments, with 70% wanting to use their smartphones to pay.3

A Forrester study showed that of those who prefer to receive digital offers on their phone, more than 50% redeemed the offer in-store. And more than half of smartphone offer users will spend more money during their visit, generally at least $25 more than planned.[3]

The majority of U.S. consumers are not yet using their phones for mobile offers, loyalty and payments. Those that do, however, tend to be younger and more affluent than the average consumer.4 They also tend to shop more often and spend more.

The people making purchases with their mobile phones break down into three main categories: generation Y, parents of young children, and rewards shoppers.

Generation Y has grown up on computers, the Internet, mobile phones, and social media. Many of today’s college students got their first cell phones when they were in elementary school or junior high. Their mobile devices are the gateway to their world, the way they keep in touch with friends and family, research papers for school, discover and listen to music, and read the day’s news. These consumers are already shopping and making payments with their smartphones today, and will become the big spenders in the next 5-10 years.

Parents of young children are another big category of mobile shoppers. Perpetually busy, they rely on their smartphones to capture photos and moments of their babies’ development as well as entertain their toddlers with videos and games. They’re also always in “buy” mode, with all the groceries, diapers, and household supplies that they consume. They are big spenders today and crave the convenience that mobile commerce brings.

Rewards shoppers make up the third major category of today’s mobile shoppers. Always on the lookout for bargains, they’ve taken their deal-hunting game digital. They’re willing to try any technology or tool that gets them closer to new savings and discounts. And the added benefits that digital provides in terms of “always with you” and integrated benefits makes it a winner over traditional, paper- and plastic-based programs.

Mobile technology is making it easier to do so many things—including making purchases. Consumers are doing their shopping from the mobile internet in waiting rooms, standing in line and on public transportation like subway trains and buses. In-store offer redemption, purchases and loyalty programs can also become faster and easier with mobile.

Easy Ways to Get Started

Getting started with mobile commerce is easier than you might think. It doesn’t take a big commitment or investment. You can start small and see value right away, then add more features as you go.

Placing an offer in the Softcard app is the quickest way to get started. Simply take whatever offer you’d normally run in a circular and distribute it in Softcard. We can help you design and re-format it so that it works in the digital format, and we can help you promote the offer beyond the wallet into other channels like email and social media.

That’s what Toys“R”Us, the world’s leading dedicated toy and baby products retailer, is doing. Softcard has helped the company distribute some of its best deals from weekly circular ads through the Softcard app. In most cases, Softcard publishes to the app within a few hours of receiving the creative assets. Toys“R”Us has been able to move beyond deals from the weekly circular into offers crafted specifically for the Softcard audience and the unique aspects of the app, including digital redemption at point-of-sale. The mobile-first offers, particularly over the holidays, have been some of the most successful digital promotions that Toys“R”Us has run across all digital and mobile channels.

Loyalty programs are powerful motivators. The Starbucks mobile app makes it easier for customers to keep track of their loyalty points—and that’s one of the major reasons people use it. By adding your loyalty program to Softcard, your customers will experience the convenience of having their loyalty card readily accessible in their smartphone, and will also get program benefits whenever they shop at your store.

That’s what Coca-Cola, the world’s largest beverage company, is doing. Softcard has helped bring the My Coke Rewards (MCR) loyalty program to life by enabling the MCR card to auto-present at over 35,000 Coke vending machines in the US. MCR account holders get three free Cokes just by tapping their phone to pay at the vending machine, and then a free Coke after buying 10. Additionally, MCR account holders can get updated balances on their MCR accounts right in the Softcard app, making it easy to get all the essential info they need in one place.

“(Softcard) is worth the investment because mobile is quickly becoming the future
of retail. And we’re not just talking about payments—(Softcard) dangles a carrot in front of
our customers with the ability to apply loyalty and coupons with a tap of their phones.”

Contactless payments are on the rise, and are now accepted at more merchants nationwide. In fact, 25 of the top 100 retailers in the U.S. have committed to NFC for mobile payments. Hundreds of thousands of locations are enabled across the country.

Contactless terminals accept payments from Softcard and allow you to maintain card present rates—and also accept Apple Pay and Google Wallet. Your customers simply download the Softcard app, and then tap their phones to your terminal to pay.

As you plan to upgrade your payment terminals for EMV, you can provide added convenience for your customers by enabling NFC for contactless payments. Beyond convenience, your customers will appreciate the safer transactions that NFC provides.

Softcard works with the existing payment infrastructure, which helps make the transition to mobile commerce as smooth as possible. Our mobile wallet also “rides the rails” of existing credit card infrastructure, leveraging the four major U.S. payment networks: American Express, Discover, MasterCard and Visa. Softcard has relationships with the major credit-issuing banks in the country—American Express, Chase and Wells Fargo—which represent 147 million cards that are eligible for use in Softcard.

Mobile commerce is starting to take off. Ten years ago, “smartphone” was not a household word. Today, they are constant companions for more than two-thirds of the entire U.S. population. Some Americans are checking their smartphones as much as 150 times a day5 and spending more time on them then they are watching TV.6

That’s what makes the mobile channel such a powerful one – and ripe for engagement above and beyond the other channels you use today.

Whether you’re building your own mobile app or expanding your digital presence, Softcard is a great way to quickly and easily accelerate your mobile commerce efforts. Join the mobile revolution. Visit softcardforbusiness.com to get started.